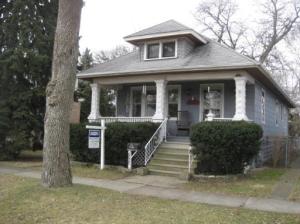 OUR <Second> HOUSE
We began rehabbing our 1908 Bungalow back in April 2012. Before it was ‘ours’ it was previously home to a family for 71 years with the original woodwork and an amazing amount of charm. Although the house had not received many updates through the years—with an old fuse box, old plumbing, a bathroom that was updated in the 50’s with plastic tile, and foundation damage—we saw the potential!

Once we staked our claim in April we quickly began working and continue to tick away at our task list, whether it is the kitchen, basement, Olive’s room, Eli’s room, or the electric, plumbing or several tasks that are important behind the scenes non-sexy tasks. As big decisions are always hard to make, it was hard to decide to move an hour north in April 2017. We found a perfect family to call it home and set out for our next adventure.

OUR <Third> HOUSE
In May 2017, we found ourselves another fixer-upper. But this time it was a mid-century tri-level home on half an acre. Before it was ‘ours’, it also had one owner for 56 years. They put much of love into their home by adding on an addition that expanded the dining room and kitchen, and added a family room. We will share our adventures as we update our new home.

US
Q is a fundraiser for a national non-profit, while I  run a design studio assisting non-profits with their various marketing goals. Olive wants to be a rainbow engineer, and shows extreme talent in singing and negotiating. Eli always surprises us with his humor and impeccable timing. Finally Bean is a professional dog sleeper, excelling at letting people know when they are not petting her enough.